– Dr Maria Montessori was born on the 31st of August 1870 to the family of Alessandro and Renilde Montessori. Both of her parents were educated. Her father was an accountant in the civil service and her mother was an avid reader.

Maria Montessori was a bright and intelligent girl who enjoyed her learning. She wanted to study engineering and was on her path to do so. Her parents suggested that she train to become a teacher as this was one of the professions open to women at this point in time. She, however, preferred to study medicine and eventually got to do so despite all the opposition she faced.

In 1896, Dr Montessori graduated as one of the first female medical doctors in Italy. She went on to practice as a doctor right after her graduation and in 1897, she volunteered to join a research programme at the psychiatric clinic of the University of Rome. It was there that she met and worked alongside Giusseppe Montesano who eventually became the father of her son, Mario. Her voluntary work at this psychiatric clinic spiked her interest and led her to observing children who were patients at this clinic with a view to understanding how to help them. Dr Montessori advocated for these children and this led her to being appointed as a co-director of a new institution called the Orthophrenic School set up to support these disturbed children.

Dr Montessori left the Orthophrenic School in 1901 and went to study anthropology and educational philosophy. She lectured at the University of Rome from 1904 to 1908. It was around this time that she got invited by some property developers to set up an environment to occupy the children of some squatters children while they were at work. Dr Montessori was happy at this invitation as it gave her the opportunity to practice educational materials she had developed in the Orthophrenic School with children with no medical difficulties. This led to the opening of the first ‘Casa dei Bambini’ or ‘Children’s House’ in 1907. Some of the materials that Dr Montessori put in the environment were used by the children and some of them were not. She took out those that the children did not use and kept only those that engaged the children. These materials can still be found in Montessori environments today. It was in this environment that Dr Montessori observed how the children interacted with each other, with the materials and with the adults and came to realise that when certain conditions are maintained, the child has the capacity to educate himself.

With time, the news of the extraordinary progress of these children became known and by the autumn of 1908, there were five Children’s Houses in Italy. Visitors from near and far came visiting and before long, more Children’s Houses were opened within and outside Italy. In fact, within a year, the Italian-speaking part of Switzerland began transforming its kindergartens to Montessori Children’s Houses. In the summer of 1909, Dr Montessori gave her first training course to around 100 students. The notes from these lectures became the material for her first published book, the Montessori Method. Dr Montessori was invited to lecture in many countries from then on. She lectured in the USA, In the UK, and throughout Europe. She lived through the two world wars, and it is likely that what she observed, heard and experienced during these wars caused her to deepen her conviction that the hope of humankind laid with the child. This gave her a strong desire to see that children are given the right support right from birth. In fact, a training trip to India which was supposed to be for just three months ended up lasting for nearly seven years for her and her son as they were placed under house arrest because of the war.

It was while she was in India that she developed ideas for her approach to education for six to twelve year olds. She called this cosmic education. She made good use of her time in India by training over a thousand teachers.
Upon her return to the Netherlands in 1946, Dr Montessori addressed the UNESCO assembly on the theme of ‘Education and Peace’ and in 1949, she received her first of three nominations for the Nobel Peace Prize. Dr Montessori’s last public engagement was in London in 1951 when she attended the 9th International Montessori Congress. She died on the 6th of May 1952, in the company of her son, Mario. 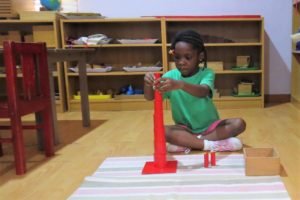 Dr Montessori used the important tool of observation to understand how children develop and devised an educational model to support the child’s natural development. From her observations, she noted that children had the potential to educate themselves if the right parameters are made available to them. Some of the main principles of Dr Montessori’s method are based on the recognition of the child’s natural gifts, the prepared environment and the trained adult
Dr Montessori noted four six-year periods in an individual’s life from birth to twenty-four years during which he showed different characteristics and thus required developmental support of different kinds. For instance, she recognised that under six years old, the child’s natural gifts are the human tendencies, the absorbent mind and the sensitive periods. An adult’s understanding of the characteristics of children from birth to maturity at age twenty-four, as well as their natural development, will enable the individual to be supported adequately through the four periods.

For Dr Montessori, it was essential to consider the physical and non-physical qualities of the environment a child is developing in when preparing it to meet the child’s developmental needs. Since the Montessori Method was developed to support the child adapt to his time and place in the world, and also create the man he has potential to become, she placed an emphasis on preparing environments to suit the child through the different periods of development. For a child under three years, she put forward the idea of a prepared home environment for the child and then a Nido (Italian for nest) when they join a larger group. From when a child starts to walk until about two and a half to three years old, Dr Montessori said an Infant Community would be a good place for the child to attend. The Children’s House was the first environment Dr Montessori created in her first school and this environment serves the needs of children from two and a half or three years old to six years old. The Montessori elementary environment serves children from six years to twelve years while the ErdKinder is what she called the adolescent program for twelve to eighteen year olds. As can be noted from the composition of each community, there is a mixed age group of children in each Montessori environment. So each community functions like a mini-society, preparing the children for real life interactions.
There are several of these learning communities worldwide and children who attend them easily transition onto universities and other careers as confident and competent young adults.

In order for these prepared Montessori environments to function as they are intended to aid the child’s natural development, there needs to be trained adults supporting the children. Each Montessori environment requires guides that are specifically trained to support children of that age group. As part of their training, the adults are helped to understand the vital role they play as a link between the child and the learning materials and opportunities in the prepared environment. The Montessori Study Centre is happy to offer seminars and teacher training for the different age groups.

The Association Montessori Internationale (AMI) is the organisation Dr Montessori formed in 1929 to protect the integrity of her work. Aside from regulating the activities of affiliated training centres and societies worldwide, it also empowers teachers and communities with Montessori education.

The current President of AMI is Philip O’Brien and the Executive Director is Lynne Lawrence. Find out more about AMI here